I came across a letter I wrote when I was about twelve. My mother was in the hospital, and I was missing her.My dad wrote a note to my junior high explaining that I had to leave school early every day for two weeks (? I think it was that long) because I was needed at home. I had a brother who was just a toddler. I can't remember who cared for him while I was in school in the mornings, but it was my job to come home and help in the afternoons. I don't remember how I got home, either, because my school was a bus ride away. But I was happy to help. 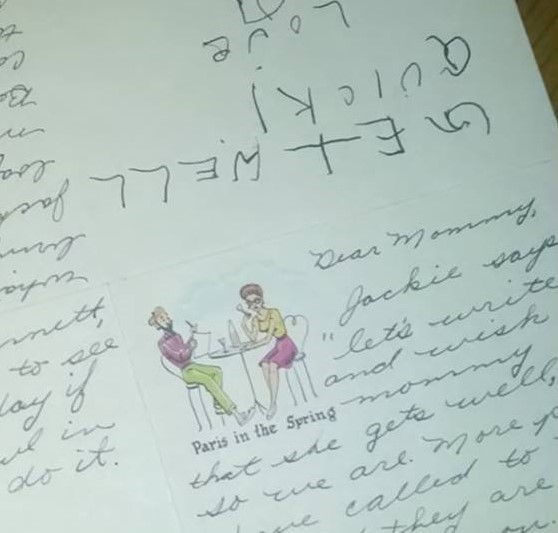 What I do know is that I missed my mother terribly. She had been ill for sometime, and finally opted to have the surgery that would alleviate her medical issues, but render her incapable of having any more children. It devastated her. In the 1950's, radical surgery was always the answer. And hormone replacement therapy was so new that it looped back on her and triggered a bipolar response that had always been just below the surface.

Writing helped me communicate how much I missed her. And the following emotional turmoil that resulted from her surgery sent me to pencil and paper often. Some of it resulted in fantastic fairy tales, some of it expressed the world as I saw it. I remember saying to my dad one day when we were driving by the ocean that it looked as if the ocean was made of blue velvet that had been rubbed the wrong way. The texture was disrupted, but darkly beautiful. For once in his life he was enthusiastic about my use of language. I think that set me on a track that has lasted for the rest of my life.

I want to share the world as I see it. It's not always easy to do that. Sometimes people cannot see through the lens I have -- or the perspective that seems obvious to me.

There are views of the world and relationships that I want to share because that's what we do. We share what we have, what we see, what we know. Or at least that's how I think all of it works. Do you see what I see? Let me show you.

Then, please show me what you see. Together we get a much better view, and a more complete picture. We need that, always.